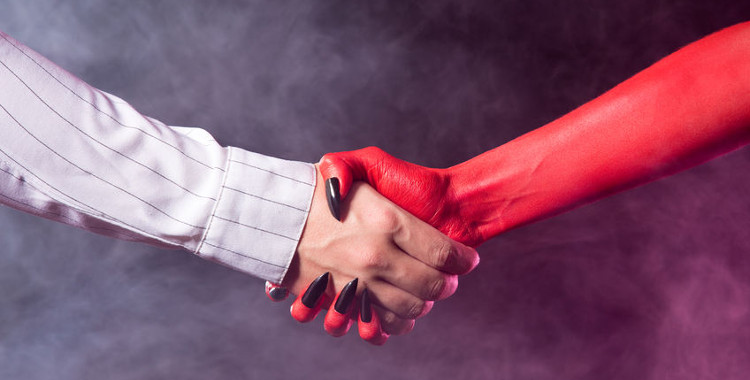 As Halloween draws near, television becomes increasingly consumed with ghosts, goblins, and the supernatural. One common Halloween theme involves a human being that enters into a contract with the Devil for some kind of earthly gain. The theme appeared as far back as the 1500s when Faust sold his soul for magical powers. More recent iterations include such examples as Homer Simpson selling his soul for a donut; Bedazzled, in which a man sells his soul for 7 wishes; or Star Trek the Next Generation (in the episode “Devil’s Due”), in which the population of an alien planet agrees to sell its servitude to the Devil in exchange for 1,000 years of prosperity.

As someone that has a bit of a fascination with contracts, this all got me to thinking: because the idea of a contract between parties is human-spawned, would it not stand to reason that human contract law would apply to contracts with the Devil? And if so, what exactly would be the legal outcome in the inevitable dispute between the Devil and the contracting human? Accordingly, this blog deals with a few hi-lights of how I believe litigation surrounding a contract with the Devil might flow.

To illustrate our hypothetical litigation, let’s choose a specific example. It’s important to approach it in this way, because every case is going to be a little bit different, and the analysis can change accordingly. For this discussion I will use, the movie, Ghost Rider, released in 2007.

THE FACTS
The Ghost Rider story begins with young Johnny Blaze. Johnny is a teenage stuntman who works with his father. It turns out that Johnny’s father has cancer. The Devil shows up immediately thereafter, and melodramatically offers to rid Johnny’s father of cancer in exchange for his soul. Johnny appears to disbelieve that the man in front of him even is the Devil. The Devil hands him a scroll containing the written terms of the agreement. As Johnny unrolls the scroll, he slices his finger and a drop of blood hits the contract. The Devil says that the drop of blood is sufficient to seal the deal and then leaves.

In the next scene, the Devil causes Johnny’s father to die in a motorcycle accident. He virtually admits his crime. This was the Devil’s way of ensuring that he complied with the letter of his obligation (preventing death by cancer) but of preventing the father from getting in the way of plans with Johnny.

Johnny grows up and the Devil makes his reappearance and forces Johnny to turn into a motorcycle-riding flaming skeleton warrior with magical powers. The Devil, of course, requires that Johnny use his powers to dispatch supernatural enemies.

THE PROBLEMS
Johnny should have immediately spoken with an attorney. Here’s why: there are a number of claims that he could have used to get out of this contract.

An advanced caveat, for all you legal scholars out there: this is intended to be a very simplistic review of contract law principles as applied to this scenario, and is not intended to be jurisdiction specific.

Lack of Mutual Assent/Lack of Intent to be Bound
The first, and most glaring problem with this whole scenario, is that Johnny never actually agreed to be bound to the contract.

In order to have a valid contract, you must generally show that there was an offer, acceptance of that offer, and consideration supporting the contract. There was obviously an offer here. The Devil came to Johnny and said that he would cure his father of cancer in exchange for Johnny’s soul.

But there was never any acceptance. Johnny simply looked at the contract, curious as to what it said, and when it sliced his finger, the Devil asserted that there was an acceptance. But Johnny said nothing, and manifested nothing that could be interpreted as an assent. Accordingly, there was no way this contract ever came into fruition in the first place. If there was no contract, the Devil could not have enforced its terms.

That said, many contracts with the Devil do involve clear acceptance, and you might argue that Johnny’s subsequent compliance with the terms of the contract reflected his ratification of the contract, so let’s continue on with the analysis.

The Devil immediately killed Johnny’s father after curing him. This obvious subversion of the intent of the contract constituted a material breach of the contract (a serious breach). This would have in turn relieved Johnny of any obligation he had under the contract.

Slavery/Contract for Unlawful Purposes
Contracts that are for unlawful purposes are generally void. For example, a contract to take out a hit on someone, is not enforceable at law.

Slavery is typically illegal. I am not aware of any law that says it’s illegal to own someone else’s soul, but in effect it seems very similar to slavery. Johnny is forced to run around and do the Devil’s bidding. Since the function of the contract is essentially slavery, and slavery is illegal, the contract is for an unlawful purpose and is therefore void.

Even if Johnny lost on those grounds, the Devil uses Johnny to slay enemies. Thus he used the contract to enforce murder. That is clearly illegal.

Unconscionability
If a contract is found to be so manifestly unfair or unreasonable that one party wields all the power and there isn’t any meaningful advantage to the other, then the Court can find that the contract is unconscionable and is therefore void. Johnny would likely prevail in a claim that his contract with the Devil was unconscionable because he really gained nothing (particularly after the Devil kills his father) and loses his freedom for the rest of eternity. This is a manifestly unfair result and the contract should not be upheld.

Incapacity/Contract with a Minor
Typically, even if a contract is validly entered, if it was entered by a minor, the minor can choose to avoid (make invalid) the contract.

Personal Jurisdiction/Forum Selection
As a simple final thought, there might be some question about where to file suit regarding a dispute over a contract with the Devil. It’s not clear if there is a forum selection clause in the contract that would allow the Devil to require any lawsuits be filed in a certain jurisdiction. The Devil would be wise to insert such a provision, and force litigants to sue in some hellish court. Presumably demonic juries would be more sympathetic to the Devil than earthly ones. Since hell is likely full of lawyers, it’s probable that the Devil readily has access to attorneys that would have advised him of the same.

Absent such a provision, the Devil probably subjected himself to earthly jurisdiction by showing up and signing the contract on Earth. There is however, a slight concern in that there is a published federal case (albeit not a binding one) finding that the U.S. Federal District Courts probably don’t have jurisdiction over the Devil, a “foreign prince.” United States ex rel. Gerald Mayo v. Satan and His Staff, 54 F.R.D. 282 (W.D.Pa. 1971).